Tale of the mighty Collembola!

An introduction to Springtails

The bold search for the earthworms continued in the Arboretum at the University of Guelph, by the brave invertebrate students! As we dug away, shovels in one hand, a dichotomous key in another, we struck earthworm gold. Little did we know that beyond the discovery of our invertebrate friends, little Collembola, also known as springtails, were bouncing around our experimental sites. If you could call any insect cute, Collembola would definitely fit the adjective. 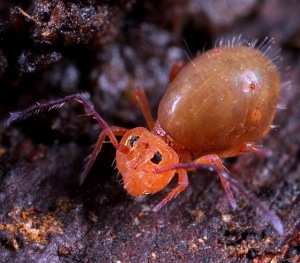 These little “bugs” belong to the Hexapod family, which consists of the wingless insects.  Springtails live in leaf litter and earth soil, in our case, among the earthworm habitat. They are the most abundant of all soil-dwelling arthropods (invertebrates with an exoskeleton, jointed appendages and a segmented body) (Crankshaft, 2010).

The Springtail body consists of three major regions; the head, thorax, and abdomen. 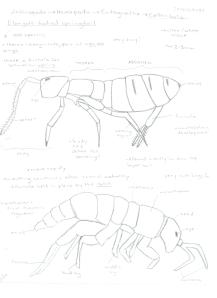 The most impressive feature of the Collembola, is its ability to spring from one place to another when it senses danger! This spring mechanism is powered by a fork looking structure known as the furcula, located on the abdomen of the springtail. In an episode of ‘Life in the undergrowth’ , David Attenborough stimulated this amazing mechanism by poking a Springtail in the abdomen with the end of a tack, startling it, and causing it to go ‘catabulting 15 cm in the air, the equivalent of a human jumping over the Eiffel tower!’ (Life in the Undergrowth, 2006).  Video Courtesy: Life in the Undergrowth narrated by Attenborough, David (2006)

The biomechanics this invertebrate is astonishing! They truly are wonders of the insect world.

The courtship behaviour between springtails is quite impressive! The following video shows the the common head-butting ritual performed by male springtails to get the  the females to be his “dance partner”.

A study was conducted by Kozlowski et al. (2006), in which courtship behaviours between a male and female Collembola, were observed. A push-and-retreat ritual is performed by the male and female where they butt heads first, and then their mouthparts meet one another for a “kiss.” The pair do not change their positions much on the “dancefloor” (Kozlowski et al. 2006). 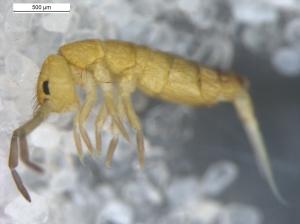 One group of collembola, the Poduromoorpha, have furcula’s that are short or almost absent, so they evolved  repellent body fluids that are released by reflex bleeding when attacked by predators! http://www.the-crankshaft.info/2010/04/collembola-springtails-snow-fleas.html.  There are even different species of springtails that are active in cold environments, “Snow fleas” are Collembola that live in the Arctic or Antarctica, on snow! The link to this blog is all about snow fleas. http://www.the-crankshaft.info/2010/04/collembola-springtails-snow-fleas.html.

Sadly, as our worm hunting came to an end, we had to say goodbye to our Collembola friends, taking with us the wonders of their biomechanics and lifestyles. Springtails give back humans not only their decomposing abilities, but  characteristics of their anatomy to marvel about and question such as: why would evolution gear towards a furcula instead of wings? Does it prove to be more effective for the habitats they acquire? These are the questions that hopefully I will, or another zoologist, be able to answer.

Welcome to WordPress.com. This is your first post. Edit or delete it and start blogging!